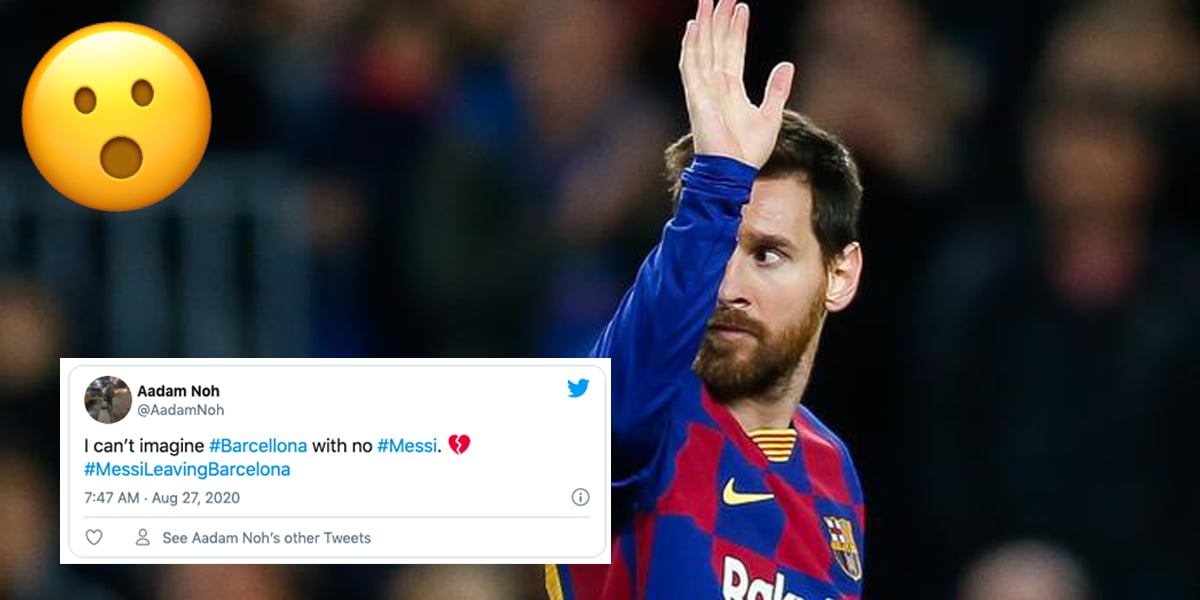 The G.O.A.T. needs no introduction because well whether you love football of not, you know exactly who it is. YES, we are talking about Lionel Messi.

He has expressed his clear decision to exit the club after the club’s biggest loss against Bayern Munich in UEFA Champions League Semi Finals where they lost 8-2.

Fans were as shocked as the team managers by Messi’s sudden decision, who has been in the club since he was a teenager. Many fans took to Twitter to express their feelings.

This loss was the most trending news online for all football fans and the news came with mixed reactions by fellow players, fans, and the management of other football clubs.

1. This tweet sure has some interesting wordplay in it

2. Another fan expressing his feelings on the expected exit of Messi

He will leave and take our hearts with him… Love you G.O.A.T ? ❤#MessiLeavingBarca#LeoMessi #LionelMessi #messileaving #GOAT pic.twitter.com/yLp7sxjLAR

3. Heartbroken fans took to spill their hearts out over the news

I can’t imagine #Barcellona with no #Messi. ? #MessiLeavingBarcelona

4. This tweet just gave us a much needed life lesson, tbh

You don’t know what you got till it’s gone ?#messileaving pic.twitter.com/C4ahBBvEKi

5. Though no sources have confirmed it, Messi seems to be in talks with other clubs, and football fans have taken no time to meme this situation!

6. Surely is an old bond that could be formed again!

Football meme pages didn’t spare an opportunity to create memes on the biggest rumor going around that Messi MIGHT join Manchester City which is managed by Pep Guardiola who was the former manager of FCB.

Pep Guardiola when he heard that Messi wants to leave Barcelona: pic.twitter.com/HsW4XG8Q3l

7. In other news, there is a fan who is literally wishing for the biggest DREAM COME TRUE for all footie fans

If I were a multimillionaire or billionaire I’d have paid any amount of money to make @messi and @Cristiano play in one team.
As rumors of Messi leaving Barcelona are getting stronger and clearer.#Football #MessiQuedate #MessileavingBarcelona #Laliga #SerieA

8. Fellow Barcelona player Carles Puyol also tweeted saying that he is supporting Leo in his decision

READ MORE:
Save The Date: F1 Will Be Returning To Bahrain In November and December

READ MORE:
The Biggest E-Gaming Tournament In Bahrain Is Gearing Up For Its 3rd Edition